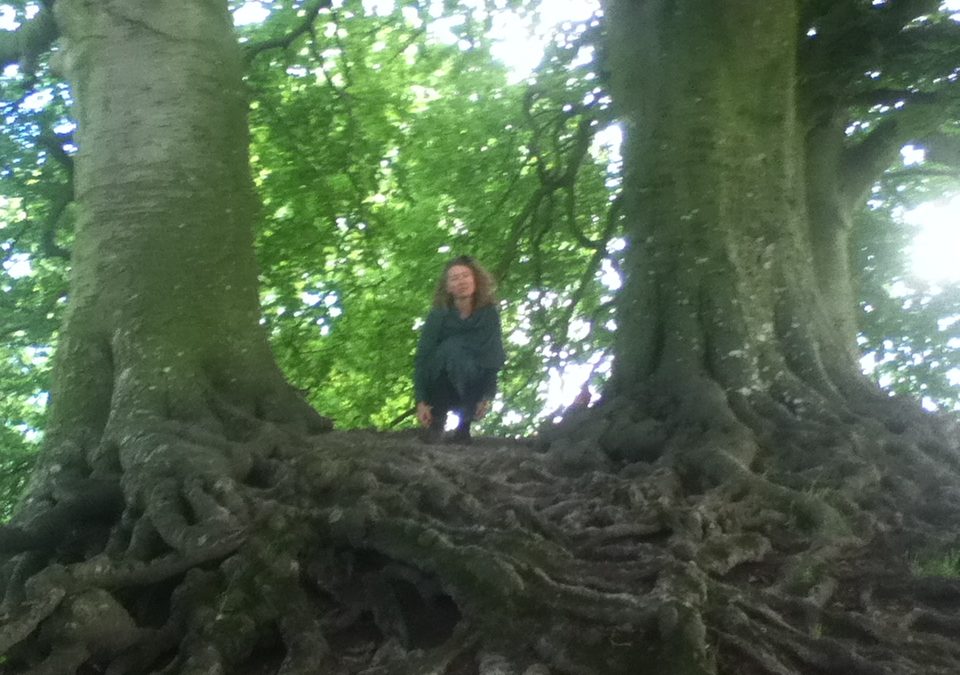 How do we re- root after a life- time of uprootedness?

Just shortly after my return to Dartmoor I’m very aware of the need to land well and root back into what has become, in the last few years, my beloved home turf.   A part of me still feels as if she’s in India, a part of me feels scattered along the journey and a part of me is consciously trying to bring all the parts of me back together and plant my roots where they’ll most serve me, ie right here, right now!

During my Inner Smile meditation this morning I was well aware of this sense of lack of roots, often manifested in an inability to focus.  When I did finally manage to still myself and smile into my Kidneys, they really wanted to speak to me today….they showed me flashbacks of traumatic incidents, where I’d slipped on slippery ground, (literally my feet slipping out from under me, either on slippery ice, or loose gravel on hills, on roller skates or simply being off balance) I now understand this as a result of not having had my energetic roots down deeply enough and hence not having enough access to calmness or balance  ….. this is a big part of my “story”, and also that of many other women I’ve met along the way..

Theres this imagery of women being literally pulled up from their roots by a patriarchal system – a disturbing image of us being dangled by our hair in the air, with our roots left flailing above the earth desperately trying to reach the ground.

And,  in a sense, this is exactly what has happened to the feminine energy.  The  impact of this on women (and hence men) has been monumental – a woman’s principle strength lies in her connection to the earth, and without being rooted in the earth, she cannot connect to her body.  Without this connection to the body of Mother Earth, and, therefore to our own bodies,  we simply cannot function properly.  This has occurred because a) as Westerners we literally have lost our earthy connection, walking around as we do in shoes upon concrete, being encouraged to function principally from our brains, and b) because we’ve been conditioned to believe that our body below our waist is shameful and dirty, so we’ve subconsciously disconnected from and denied this potent, natural part of ourselves.

This resonates so deeply with me, because for a lot of my younger life, I’ve felt as if I’ve been ‘out of my body’, literally ‘spaced out’, and although I’ve managed relatively well in a Yang, more masculine oriented culture, it has seemed a struggle, like a feeling of rowing upstream without a paddle.

Its been a feeling that my feet could never quite plant themselves properly – people used to call me “Fairy Feet” because often I’d seem to float across the top of the earth on the balls of my feet!  A girlfriend commented just the other day,  ‘When I saw you on the dance floor, it was as though you were flying & simply not even touching the floor!’ Sometimes, I’ll consciously do the low African Earth Mama dance to drums to get myself back in my lower body and feel my feet back on the earth!

This ungroundedness and lack of strong roots can lead to a low grade anxiety that is constantly with you; is usually subconscious and affects everything you do – it slows you down, depletes concentration & focus which in turn affects your self worth.  Without roots, we can’t feel balanced – we can’t have a healthy upward growing Yang, without a rooted Yin.

I observe this symptom in other women (some men too).  There’s a sense of unsteady, spindly legs like a baby giraffe just learning to walk – the weight and the emphasis is all in the upper part of the body, or often no sense of inhabiting the body at all – there’s no solidity in the legs; a gangliness about them; an unsteadiness as if they could topple over at any moment or as if the slightest gust of air might whisk them away… and these women don’t necessarily have to be skinny, but often their legs are thinner in my observations!  You’ve probably noticed that theres a sense with some people that they’re perched precariously on top of the earth.

On the other hand,  more ‘grounded’ women feel as if their feet could merge with the earth and their weight is most definitely in the lower half of their bodies, both physically and energetically.  These are often the women we’d refer to as Earth Mama’s, the earthy maternal types with babies balanced on each hip, the pear shaped women or the infinitely capable women, the ones who are organising and helping the others out!

The unrooted woman – there’s nothing intrinsically wrong with her – she is a part of all of us to a  greater or lesser degree –  she’s another manifestation of our culture, of an imbalance in the masculine & feminine – this woman is often attempting to function, and often floundering, in a masculine world without the feminine foundations that would sustain her….a bit like the vulnerability of a house without foundations, trying to remain upright in the midst of a hurricane!

And so, for a lot of my life, I’ve belonged to the club of unrooted women, though I wasn’t really conscious of this lack of weight in the lower half of my body before, and I wasn’t wholly conscious of it until I started tai chi and qi gong about 15 years ago.   How hard those standing postures felt at the beginning – ‘what are they talking about?’ I pondered as I valiantly tried to sense some solidity in my legs and some roots growing from them!  And  later, how satisfying it felt once I’d really learned to sink into my body.

Coming back to this really grounded, calm place can still be a challenge for me.  How grateful I am for the road map that qi gong offers to guide me gently back home to a rooted centre.    And how grateful I am to these trees that I live amongst. They happily offer me their great girths to hug so my belly can breathe with their trunks;  my roots can sink into theirs and I can feel, once again, the gift that is planted presence. 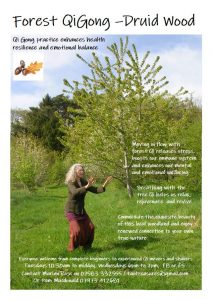 A WEEKLY DROP IN QI GONG SESSION TUESDAY MORNINGS 10.30 TIL MIDDAY WEDNESDAY EVENINGS  5 TIL  6 PM (until it gets too dark at 6, then we’ll reconfigure!!) IN THE EXQUISITE DRUID WOOD,[...]
View Calendar